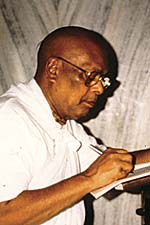 A Biography of Sri Ananta Das

Pandit Sri Ananta Dasa Babaji Maharaja was born in the district of Jharikhanda in 1927. During the earlier years of his life he held the occupation of a teacher, living with his wife and children. Having heard of the fame of Sri Kunja Vihari Dasa Babaji Maharaja, a renowned bhajananandi saint at Radha Kunda who was influential in the area of Jharikhanda during his householder life, in 1950 Sri Ananta Dasaji decided to leave for a pilgrimage to meet the saint.

Having arrived at Radha Kunda, he met with the mahatma and received initiation into a disciplic succession descending from Sri Nityananda Prabhu and Srimati Jahnava Mata through the descendants of Sri Dhananjaya Pandit. During the following two months, Sri Kunja Vihari Dasa Babaji taught him the mysteries of the philosophy, worship and meditation practiced in the Gaudiya Vaishnava tradition.

At the end of this visit, despite his desire to stay at Radha Kunda, Sri Kunja Vihari Dasa Babaji ordered him to return back to his village to preach the message of Sri Caitanyadeva, initiating people into the practice of spiritual life. On the order of his guru, Sri Ananta Dasaji returned to his family, teaching the local people and initiating some two hundred disciples over the ten following years.

Eventually he decided to renounce the world, departing for a journey to Radha Kunda, this time to stay for good. Having arrived at this holiest of all the holy places, he received the cloth of an ascetic from Sri Kunja Vihari Dasa Babaji. Over the decades to come, he engaged himself in a deep study of the Gaudiya canon of sacred texts, at the same time becoming more and more deeply absorbed in bhajana, both in the external and the esoteric internal methods of worship.

Though often ascetics would wear nothing but one or two pieces of ragged cloth, Sri Kunja Vihari Dasa Babaji requested his disciple to dress in orderly clothes, as he was to instruct the mankind at large, and should therefore look respectable in the eyes of everyone. Over the years to come, Sri Ananta Dasa Babaji traveled around the holy land of Vraja, lecturing extensively on the scriptures, instructing saints and laymen alike.

In accordance with the request of his guru, Sri Ananta Dasa Babaji began to write extensive commentaries elucidating the concepts presented in the foundational writings of the Six Gosvamis of Vrindavana and in the writings of the later great teachers following in their footsteps. In his old age, he has retired to Radha Kunda, focusing on his inner worship and on his writing work.

He has initiated some 3.500 disciples into the Gaudiya Vaishnava tradition, including people from Vraja, from Bengal, and from dozens of Western countries. He has been elected as the Mahanta of Radha Kunda, thus being the 34th representive of the seat of Sri Raghunatha Dasa Goswami. He is widely recognized as one of the foremost teachers of the Gaudiya Vaishnava tradition on account of his voluminous and comprehensive writings as well as due to his humility and purity of heart.